After 10 years together, 5 years of engagement, 2 kids and postponing twice, we finally got married.

I got my dress (well 2 actually) , we booked the venue and celebrant and even planned our European honeymoon so we could be in Scotland for a family wedding just after ours.

Well even the best laid plans go astray and just as we were finalising plans I discovered I was pregnant.  While the timing wasn’t the best it was a happy surprise and we were excited to become parents.

We postponed the wedding to the following May 2015 and tried to rearrange things.

I did start to get cold feet around that time. Not about getting married but more the type of wedding I wanted, or didn’t want. Then to top it off there was a fire at the venue and they couldn’t guarantee it would be re-open in time. I took it as a sign.

So as we adjusted to parenthood and juggled finances I then delayed returning to work to help my mum through cancer treatment. So the wedding just kept going in the “Too hard” basket and we postponed indefinitely.

Well fast forward 3 more years, another baby and as our 10 year anniversary approached I said we should probably look at FINALLY getting married. I wanted to make it official,  especially now with the kids.

Hubby (I can officially call him that now ha) and I agreed we didn’t want a big fancy affair. We toyed with the idea of eloping or just going to the registry office but then agreed we wanted it to still feel special even on the small scale.

The chat went on for weeks and I said about 6 weeks out from our anniversary we should just book it. I still think hubby thought I wasn’t fully serious and that (like most things) I go on a high making plans then change my mind last minute. Well he was wrong.

I contacted our celebrant, the amazing Jessie Caccchillo and even at short notice she was available and honoured our deposit from 5 years ago.

We decided we would just have our immediate families at home in our yard for a civil ceremony. We aren’t religious and didn’t want a long winded service.

It ended up being 10 people and we didn’t tell anyone other than those invited. We didn’t want the fuss, the fanfare or any of the dramas associated with traditional weddings.

It was an emotional mess in the lead up. My father is passed away and understandably he was on my mind constantly. You always think as a little girl your dad will walk you down the isle.

I also started to feel bad at how deceptive we were being, even lying to close friends in order to not tell them about the wedding. But we kept it under wraps.

I got a casual dress for $45 at Sportsgirl and ordered flowers and a cake from local small businesses. We didn’t splurge on rings either. We just wanted basic bands. I was mindful of keeping costs down since it was such a small scale affair.

A major bonus was also having photographer best mate  (Christian Scott ) that also does hair and make up so that was sorted too.

The ceremony ended up being in our lounge room as it started to rain so we quickly shuffled furniture around. My mum walked me in,  our oldest son carried the rings and it was perfect. I’m so glad our boys were a apart of it. 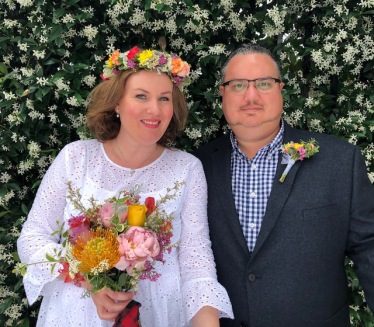 The rain then cleared and we signed the registry outside and got some photos and had a champagne toast.

I used my fathers clan tartan around the bouquet and also added his wedding ring. It was my tribute to him.

We dropped the boys at daycare afterwards so we could enjoy a relaxing lunch and headed to a local restaurant to celebrate.  Then later we spent the night at a hotel.

We spent the next day letting everyone know our big news. Understandably some people felt they had been left out.

Has anything changed? not really. But at the same time it does feel a bit different. I have been very emotional all week. I think the build up and keeping everything a secret just caught up with me.

We are planning a belated reception in the new year to celebrate with extended family and friends. Not a big traditional reception but something more to include everyone. Note to self- I should get cracking on organising that!

So there you have it. My low key budget wedding. It can be done!

P.S- Yes I still have both the old wedding dresses. I will donate them.

View all posts by larakerr